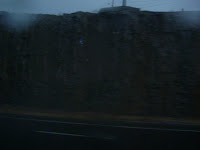 Thursday we had the weather from hell. It started lightly raining shortly after we got up for breakfast. After breakfast we went back to the hotel room and loaded the truck. Dharma (kitty) loaded up really easy this time. I just picked her up and hugged her , then set her infront of the open carrier door. She went right in without the slightest bit of a struggle. There was only one little meow from her as hubby brought her down the stairs and headed towards the truck. In fact, once we got her loaded there was barely a peep out of her all day. She just curled herself up and went to sleep. I think she finally realized that just because she was put in the carrier and just because the carrier was brought outside...did NOT mean she was going to a vet. I found it rather surprising that Dharma was so settled because she's normally a tad on edge during horrendous weather. This day we had just that sort of weather. I wish that picture showed it better. The road we were on had stone on either side and the rain was coming down so hard that there were small waterfalls every few feet. Unfortunately I *just* missed a particularly spectacular one in that photo. 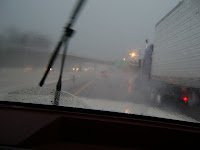 This next photo shows the weather during some of the best visibility we had all day. Most times we couldnt see much farther than the nose of the pickup. Many times hubby tried to keep behind an 18 wheeler for a bit of shelter but there were times when the wind was so bad the rain was flying horizontally and the bigger trucks provided no shelter at all. We had pea sized hail at one point and the lightning show....well let's just say I wasnt enjoying it in the slightest. I used to as a kid but there was an incident during my first marriage where a nasty storm scared me so badly, well it makes me extremely nervous now. Thankfully I fell asleep during the worst parts of the storm. In the pic to the right, we were doing 30-35 in a 70 mph zone.

We arrived in Tazewell, TN in one piece. Our first stop was to Frostees to get supper then we headed to his folks house for about 45 minutes or so, then to the hotel. I was hoping to stay at the Holiday Inn a bit farther out from the in-laws but they didnt allow pets. We ended up in one of the local motor lodges. I had my reservations about it but once we got into the room I changed my mind. It was smaller than I'd care to have but it was so nice and clean, much nicer than the place we'd been the night before. Hubby got the laptop hooked to the internet and we checked our emails. The company *FINALLY* sent the address to the corporate housing via email. It was about friggin time. I swear this hurry up and wait attitude they have really irks the crap out of me. I was really glad to see we werent going to be assigned to a hotel room but an actual apartment instead (and damn it's nice....). 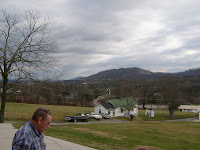 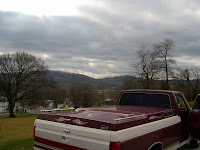 The above photos are pictures of the view from his folks house. Isnt it gorgeous? It's actually much better when it isnt so overcast. These were taken Friday before we went to his gramma's house. We spent most of the day with the family. Some of it was with gramma and some over his sister's house and then back to the folks place before going back to the hotel.

Yes, it is beautiful country. When we drove thru Tennessee two years ago, it was so hot and humid we didn't get very good pics. A little disappointing to be driving thru such beautiful country (country you'll never see again) and have the weather so icky you can't bet good pictures of it. Hey, I noticed there's a 5-lane road down there. Is this near a city?

In the rain shot from the front window we were on I40 somewhere near Nashville.

In the shots from the front porch the curvy road is Hwy25E. The main road (which you can just see from the front door but I wasnt standing there for these shots) thru town is Hwy33.

I'm glad the kitty wasn't too distressed throughout the journey. I bet that was a weight off your mind, knowing your baby wasn't distressed.

Yes Tori. I just hate when my lil one freaks out. She's getting along fine now and causing more trouble than she did in the house. She's also showing an interest in the door to the outside. *sigh* We're gonna need to keep an eye on her now that she realizes that outside isnt going to hurt her.

Ummm, nothing's been said yet, and my curiosity has gotten the better of me. What did you do with KatyLou?

I've been in a rainstorm like that, heading west out of Knoxville. Not a fun thing to drive in, and being behind a semi isn't always the safest place either. Glad you made it there in one piece.

KatyLou travels loose as always. She has her harness on with a leash attached but isnt hooked anywhere. She lies down next to her daddy and puts her head in his lap as he drives. Thankfully she travels like me, sleeps most the time and when we stop (every 2 hrs or so) she gets out to potty. She's taken many trips back east with us. The first trip was the hardest as she was used to having the whole balance of the seat to herself. This time was a bit more cramped with the carrier in the cab with us but she handled the tight conditions like a trooper.

Ok, I was just curious, because you hadn't mentioned her once, and I figured she was with you, lol.