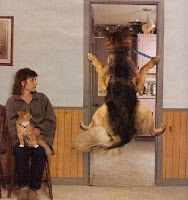 Ok, so maybe the dog wasnt this bad but the cat certainly was. We got up and took the "kids" in for a V E T appointment to get their S H O T S and stock up on some Frontline. Kitty did NOT like the ride in at all. Who can blame her? "Mommy" picked up and hugged her and then dumped her fuzzy ass in that carrier...plus it was COLD out there!! Anyhow, we got to the vet and it took a bit to get kitty out of her carrier because she was doing as pictured to the left...2 paws on either side of the carrier door and refusing to budge.

After we got them home, we dropped them off home and then went to the post office to drop off a couple packages. One is going to my SCSis (a cd) and one is headed to my mom. The one going to my mom is a perfume gift set she'd bought me and the spritzer on the bottle isnt working. She's going to do an exchange and then mail me the new package when we get to Virginia. While we were there we did a change of addy and all our mail will get sent on to his folks' house. When we get into our more permanent digs we'll do another change of addy. What a pain in the ass. I'd have much rather had the temp addy a week ago so this could have been done and out of the way. I really hate feeling like I gotta light a fire under people's asses to get things done.

Got all the knick knacks packed tonight and all the crafting stuff packed last night. Im finding lots of loose ends type things Im not so certain what to do with as they arent really used and mostly because they're his "stuff". I think I'll let him deal with them. We've done some talking and I believe we've decided to have a professional cleaning agency come in and do a nice thorough cleaning. He'll be calling them tomorrow for an estimate. Considering they wont have much to do (they wont have beds to make or knick knacks to dust) it shouldnt take them long nor should it cost us much. Oh that reminds me...I better have him call Kiwi cleaners for an estimate on the carpets.

Well I better scoot. It's getting late....not that Im really tired as I got to bed super early last night (in bed by 715pm and asleep by 730pm) and got lots of sleep. Totally unusual considering Im feeling ok. Thank goodness for that. How did a friend put it last year? What you're doing on New Years is what you'll be doing all year. Now let's think back, last year at New Years I was ill and what has been the biggest complaint I've had all year? Not feeling well. Hmmm. This year Im packing and getting ready to move. Looks like I'll be living out of boxes this year....and possibly into the next. Oh well.

How are the "kids" getting to the new home?

The black and tan "kid" (a chihuahua)travels really well. We've taken her back east with us several times. She travels like me...sleeps most the time and goes potty anytime we stop (roughly every 2 hours). Not sure how well the white and grey "kid" (my darling kitty) is going to like it as she meows all the way to the vet's and back (only a 30 minute drive each way). She'll be confined to a carrier as Im not sure how well she's going to like a long trip. She's nothing like my Fizzi (man I miss that cat) who I could have out and about no matter HOW long we drove. All 4 of us crammed into a pickup truck the entire way....gonna be fun (was the sarcasm dripping enough or should I try again?)..

I heard it drip all the way to Pennsylvania, Styxie. I don't relish that trip one bit. My cats are like yours. If I manage to get them in the carrier when I need to, they howl and meow all the way to and from the vet.

I hope things go a little smoother on the moving plans soon.

So long as she aint meowing to the point where I cant sleep during the trip is all I ask. The hardest part is going to be getting her loaded back into the carrier daily after stopping at a hotel. My luck the little bugger will climb under the bed and refuse to come out.

Yeah, I got the sarcasm, thanks! LOL!

Hearing about your "fun" trip makes me glad that when we move it'll only be at most a 30 minute journey from here. Sakura isn't the most relaxed of passengers either. Kero and Megan are fine, they just sleep, but Sakura... She makes enough noise for the three of them. LOL!

Good luck for your "fun" journey.

Our pet's aren't keen on the Vets either,but hey who can blame them! lol

Roger always shits on the floor as soon as we walk in,Great stuff!! lol

Cookie just drags her feet and being she's a 50lb dog and all muscle,her dragging can be quite the pain in the ass.

steph: Roger sounds like one tiger cat we had. Pooped on the vet's exam table each time. Took 3 of us to hold her still for shots or having blood drawn.

Not sure how Dharma's (the white n grey kid) did on her *first* trip as we'd boarded her at the same time because we were going out of state and she was just a bitty one at the time. While she was there they gave her first shots and all. I did hear that she had many admirers as they had her penned in a cat cage (those 2-3 story buggers with ledges) in the reception area. Everyone coming in was asking if she was up for adoption. Couldnt have been all that bad with all that attention!!