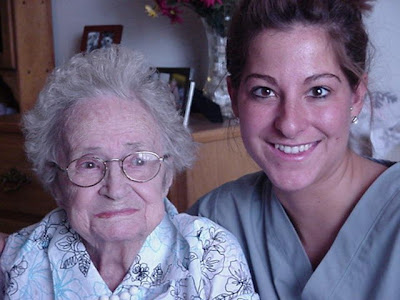 Go figure I'd do a Wordle from my memory blog that has the one entry on my great-gramma and end up with a phone call at 12:38pm from my Daddy with this news....
Heaven got another angel today. My mom's mom passed on earlier this morning. She was in her late 90s. Busha lived a very full life. Both her and grampa had held jobs and managed to raise 8 kids as well. My mom is the next to the youngest of the group. In the picture up top, with her is an aide from the resthome that Busha's been in for about 5-7 years or so. The lower picture has my Uncle Skeet on the left (don't remember his real name, just remember he's the shortest "kid" and that he's somewhere in the middle when it comes to age) and Uncle Fred (the oldest child of the family). Busha had been back and forth with her health for a few years now and a few times we thought we'd lose her. Somehow, she always managed to fight back. There had been quite a few emails back and forth lately (just this last week, infact), updating Busha's condition. The one I got a couple days ago talked about how the doctors had said she was headed into demise and they suspected she didnt have more than a couple months left. The same email said that the boys (meaning Uncle Skeet, Uncle Fred and Uncle Bill) suspected it was just a matter of weeks. About once a year I'd get emails like this, so there was no real shock upon receiving it. However, this time, while reading the email I was struck with the feeling it was going to be a whole lot less time than that. I hate when I'm right. The email that was received last night was filled with hope because gramma had perked up quite a bit. She still wasnt eating much, even with help, but this has been the norm for a while now. However, she still had her razor sharp wit. This morning, she's gone. She's left 7 children (one passed on already several years back due to diabetes complications), scores of grandchildren, many great grandchildren and a handful of great great grandchildren.
RIP Audrey Juanita Sugden.
edit 04/14/09 after talking with mom. Uncle Fred's the 2nd oldest.
Gramma was 93 not in her late 90's...that hateful alzheimers made her look older than she was.
Uncle Skeet's name was Lester. No wonder he chooses to go by Skeet.
posted at 4/11/2009 02:14:00 PM

She looks like she was a lot of fun to be with - the bright eyes and perky smile. Her sons look like they adored her too -

Ninety plus years is a good long life - especially when the mental process is still sharp.

I'm sorry to hear of the loss of your family's matriarch, LadyStyx.

I'm so, so sorry to hear about your Busha. You and your family are in my thoughts.

My condolences to you and your family on the loss of your beloved Gramma. She looked like she was a wonderful lady. You will all be in my thoughts and prayers. *hugs*

Huggsssss Styxie. Even though she lived a long life, it is never easy to lose a loved one. I'll bet she was a pistol, just like her granddaughter! I'm sorry for your loss hun.

My condolences to you on the loss of Busha. Even when you're expecting it, it's not easy to lose a family member.

*sigh* A wonderful tribute to a gal who sounds like a wonderful woman! We're all sending positive thoughts your way...

((((LadyStyX))) sorry to hear about your nanny passing, but oh my what a long life, and how wonderful that you had her for so long.... what memories you must have....

My kids do not have grandparents.... well, my parents died about 9 years ago withint 10 weeks of each other, my Xs parents live in Spain and have had nuffin to do with my lads since my X walked out, so technically they have those grandparents but they dont know them......

My Tom said something sad last night at his birthday bash..... he said, if and when he marries his girl and they have children, those children will not have any grandfathers.... ya see, his girls father died a few years back and our Toms father (the tosser X) dont have anything to do with his kids.... and hasnt since he walked....... so Tom is right, his kids will only have nannies... me and his girls mum, thats if I live long enough lol

hugs to you on this easter sunday, treat yourself and stuff ya self daft with chocolate......

I'm so sorry, I know how difficult it is. *HUGS*

I'm sorry to hear about your Grandma. I'm glad though that you had her for so many years. Just be thankful for that, and remember the good times you've had with her over those years. *Hugs*

I'm so sorry about this! My condolences and hugs go out to you and your family.

I am sorry to hear such sad news in your life *hugsssssssss*. She looks like she was a bit of a go getter who loved to joke around and have fun!! You must take after her!!! *hugss* again!

So sorry to hear about the loss of your Grandma. Sounds like she lived a full happy life, with a big family who loved her. My Gram was also 93 when she passed. I still miss her sooo much. Grandparents are such a big part of a childs life. You were lucky to have her. May you always remember the good times.

What a great memoir of your Gramma. My own grandma died this time last year, I'm so sorry for your loss. Just think, she is such a beautiful and happy angel in heaven looking over you!

How did I miss this?!! I am so terribly sorry. Heaven is lucky right now to have such a lovely addition to the family. You have shared such nice memories about her with us; thank you.