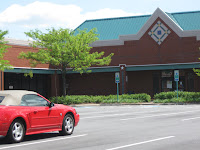 As I'd been telling everyone, there has been expansion as well as loss in our area. Some businesses close while some open. We've had a few that simply changed into bigger locations. One of the the ones expanding into bigger digs is the clinic where I go for my weekly allergy shot. This shot to the left is the old clinic location and was snapped less than a week after they moved. Amazing how deserted it looks in about a week's time. It's a great location. I'm wondering who is going to move in next. It may take a while though, as that section to the left used to belong to a gym and it's been sitting empty for nearly a year now. 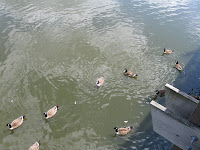 On the 23rd of June, hubby and I decided to head on over to Logan's for lunch. It was a beautiful day and as usual. I couldn't help but to take some pix of the water fountains (not shown but are in the Flickr photostream). The retention pond was loaded with geese and ducks that day, so I let (how does Di put it? Oh yeah...) "Ms Snappy Finger" do her thing and just click away. After several shots, I decided I'd had enough until I saw.... 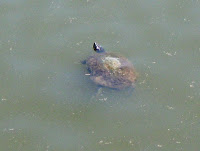 this guy (or is is a gal?). It was a pleasant surprise as we generally don't see anything other than geese and ducks in the pond. It was nice to see that the waterfowl had a bit of company for a change. I wonder how many other critters are in there with them. 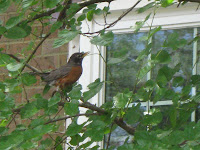 When we got home that day, I saw this pretty robin sitting in the neighbor's tree. I can't believe it sat so long for me to get this shot. We have some cardinals nesting in the trees out behind our backyard fence. Hubby has suggested keeping the old camera downstairs so we can hopefully get a shot of them or at least of the Charlie that keeps running along or fence. I really need to get myself to a zoo (NO! We didn't go while in TN...*pouts*) and run this new camera through its paces. I'd love to see what it gets in the aviary. I'd also like to get to one of those flower or butterfly gardens. 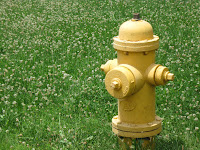 I'm not certain why I clicked this one. I think it might simply be because I loved how the yellow hydrant contrasted against the green of the grass. It turned out to be my favorite shot of the day.
This shot actually inspired one that I took while we were walking through town in TN. It'll get posted in the next week or so. There'll be a whole post on just shots from hubby's hometown. Some really neat buildings and a couple site markers that may interest the historian buffs here. 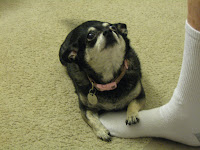 I couldn't resist this shot. Katy's taken to the habit of putting her paw on hubby's foot as if to say "My Daddy". If he pulls his foot away, she just places her paw over his foot, hooks her toes over the opposite side and drags it back towards her. *laffz* Silly dog. The little blur behind her toosh is her tail wagging furiously. It was going so fast, the shutter couldn't catch it.


I think that'll do for now. Lots more to cover and I don't want to get to the point where this feels like a chore. We all know what happens when THAT occurs.
Thanks for the comments on the new blog name. I think it fits and is something I can live with for a while.
posted at 7/03/2009 07:26:00 PM

Didn't you have quite the day of nature!

Love the paw up, my doggy does that to me too. It's a dominance thing.

Oh, Katy's so adorable! You can see how much she loves your hubby! Even when cats are being lovey, they still look sly...dogs never do.

Cute pic of Katy, and she definitely loves Ranger.

I wonder if that was a mud turtle or a snapping turtle. Snapping turtles usually have a rather pointy snout. We have them in ponds around here. Had one in my grandma's yard one summer. We got Terri to put it in a big crate and take it up to the neighbor's pond. It was a big one...filled up the crate. (it musta escaped)

Awww! I love the pic of the turtle...and Katy is adorable! :)

Aww My Daddy that is so cute! Max does that, just like MINE, no my Wendy or anyone, just MINE.LOL

That is too funny about the dog staking her claim. :)

I like your fire hydrant shot too and partly because I hardly ever see them in yellow!

Such great shots!! I so look forward to them, and Iggy's as well. I feel like I shared in your memories.

Nice pictures! That is so cute how Katy lets hubby know he belongs to her, lol.

Spectacular set of pictures. You've definitely raised the bar and I'm going to have to try much harder to keep up with the quality of your shots!

I love the yellow hydrant. And who can resist such a cute doggy.