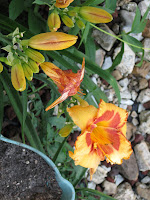 When we pulled in on that Friday night, I saw the most beautiful flowers in mom's "garden". I don't ever recall seeing them before although I'm sure they've been there every time we visit in the warmer months. Anyhow, I suspect that I noticed it now simply because there was a lesson to be learned. What was the lesson? Well, all this time I've been trying to learn the "don't sweat the small stuff" lesson and it was time to add the "pay attention to the little things" part. So the weekend, for the most part, for me was "Pay attention to the little things, just don't sweat them". Because of this lesson (as well as the macro, foliage and zoom settings on my new camera), I got some pix that I normally wouldn't have even tried for (and in one case, normally would have run away from, but that's a story for another day). This particular bloom was on its way out and was quite dead around the edges. You can see another bud that had already gone past expiration. None of the others were bloomed out and it actually made me look forward to waking up the next day there to see if one of the other colors would be opened up for me to capture with my camera. 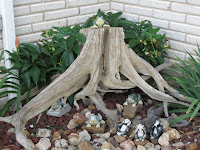 His mother has this partial rock garden. Actually, I should say that it's a majority rock garden. It's about 85% rocks and some plants. I always thought the purpose of a rock garden was to be all stone? Ah well. There is this interesting corner piece to it, however. I don't know if the tree had originated there and simply been cut down and dug up, or if the wood piece was brought in from elsewhere, but it makes for an interesting shelf for one of the pieces. The guy on the top (as well as a couple of the others) made me think of several of my friends....... 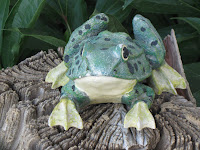 Here's a close-up of the guy up top. Any guesses as to which readers I thought of when I saw him? The monkeys at the base made me think of my GaSis. I had a closer picture of them but it was blurry so I pitched it. I do have other shots of some of the other pieces in my Flickr account. Feel free to pop over and take a look if you care to. I'll be adding more to the TN folder in the next few days. I'm trying to do it a bit at a time so I still have time to do other stuff around here. Well that and the fact I want this to stay fun and not feel like a major chore. While in the pix files, feel free to take your time as I went into details on a few other pictures there. This guy to the right is a new addition to the family. He's supposed to be the nephew's dog but this guy actually lives at "paw-paw's" house (sissy doesn't want it at her house as she doesn't like dogs and isn't home most of the day anyhow). The pooch's name is Skynyrd, named for that southern rock band. The nephew insists on calling him Snoopy. I found out the dog will answer to pretty much anything so long as it's said with love and results in a good pat on the head. He's 10 months old and is a pretty good size right now. I don't think he'll get too much bigger though. 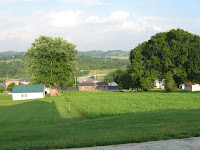 This is one of the pictures I was mentioning before that will have more details in the Flickr account. Do you recognize the one tree on the left? It's the big one that I clicked back in December. I'm not seeing an entry with the other picture though so I'm not entirely certain I shared it in Blogger or not. I'm not seeing it here but I know for sure I shared it in my Photobucket account. The next tree I don't believe I got a shot of before but I clicked a couple similar trees that trip. 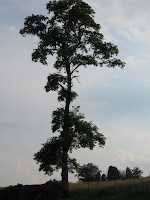 It reminds me a bit of a bonsai tree with the way some of the branches are on it. The only thing it needed is a bit of twisting and contorting. I kinda like the simplicity of this picture. In trying to get the entire height, I couldn't get much more in the frame with it. Maybe it's a good thing, eh? The next day's worth of pictures, I think I got a shot of grandmother's trees while we were out this time too. I'm not certain right now as I'm downstairs on the laptop and the balance of the pictures are on the main computer upstairs right now. It's highly possible it's in the next set of photos. Then again, the next set might be the pix I snapped while we were walking home that one day. Yeah, hubby knew I needed some away time ;). 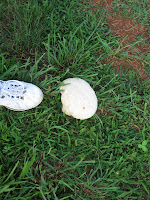 Anyhow, on this day hubby saw some rather oddly shaped white things in the lawn. There's a distance shot in the Flickr. When he approached, he noticed that they were these HUGE mushrooms (ew). The picture to the left is one next to his foot for a size comparison. They were quite large. *gets up for a sec to check size of hub's slippers* Ok, his slippers are an 11-12 so I'm guessing his shoe is a 10.5 or so. When he realized what it was, he asked to borrow the camera (not "can I have the camera"..."may I borrow" was actually used....Why? Because this camera I bought with MY money so it is definitely MINE. Ok ok...the money was from my account but it was more than likely from funds donated by him. Sheeesh. Picky picky y'all!). 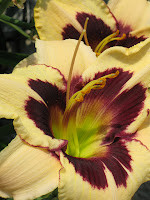 I was so happy to find out, upon rising the next morning, that my hopes that the other blossoms would have bloomed by the next day had, indeed, done just that. The most GORGEOUS reds and yellows ever. Considering that yellows aren't my "thing"....that comment is really kinda telling. This one to the right (again, turned by Blogger against my wishes) is my absolute FAVORITE of the group. Actually, it's my fave of the whole trip I think. It's not a cropping of the other picture of the yellow blooms, this one is SFTC.
posted at 7/08/2009 07:35:00 PM

I can see a number of things that might remind you of some "fellow" bloggers, the frog and Alice Kay and Karla - the big tree for a certain tree huggin' coniac (the cute dog is just for good measure!) - I recall a spirited deabte over the merits of eating mushroom :) - someone we both know said to me very recently, "I want to move to a farm or someplace very far away from people" and your "two trees farm" picture evokes memory of them.

I love how blogger has made us so aware of each other in the "little things" around us each and every day.

That last flower picture is simply incredible and I've no superlative super enough for it. And now when I see an incredible flower around my neighborhood - I see you posing with it so to take its picture - with YOUR camera and YOUR talented eye.

I hope everyone visits your Flickr pages - its well worth the trip and the time.

Sounds like you were really vacationing with Mother Nature! I do believe those beautiful flowers are day lillies. And I have difficulty with these easy-to-grow plants because of the number of deer who love them, too. Of course, I love to look at them...the deer love to eat them!

Really nice pics, Styxie. I love the froggie one. :) I also love the "hear no evil, see no evil, speak no evil" figurines. I have this little figurine that used to belong to my grandfather that was given to Karen (but is still here in this room) and will have to take a pic to show you sometime. Cute.

Loved the tree pic when I saw it in your Flickr account. Reminded me of a Bonsai tree, too. Bonsai trees have always fascinated me. We have those huge mushroom things around here when it gets really wet and rainy.

I took a few shots of my day lilys the past couple of days. Took a couple of close ups last night. After you mentioned the macro setting on your camera, I looked at my camera. Duh....there is a setting on there. LOL I got a couple of shots of my yellow asiatic lily with a wasp on a petal. I'll have to post them when I get some time.

Dang...time has gotten away from me and I need to go get ready for work. I have a long day ahead of me today. Hope yours is a good one. *hugs*

I immediately thought of AK when I saw the frog picture. That is one huge mushroom (toadstool?)

It definitely seems like you did a good job of not sweating the small stuff and paying attention to the little things. I'm glad to see you are enjoying YOUR camera. LOL
I enjoyed the pictures.

The last bloom is my fave as well. It's just too beautiful! And I have nothing growing in my yard as nice as that!

The tree in the corner of your mom's rock garden is just so interesting to look at. The flowers are absolutely gorgeous. I love how those petals peel back like that but that mushroom is frightening!

Dang, there's a lot to talk about in this post!

My guess about the flower was going to be a Day Lily, was hoping someone would have already confirmed that before I commented, lol.

Sounds like you had a really nice time in TN.