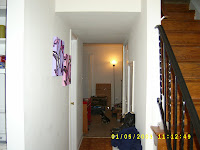 Here's a pic looking from the front foyer down to the livingroom. As you can see there's a helluva lot of chaos going on in the livingroom still at this point. Oh look...I caught Katy sitting there looking at her daddy too.... The pictures you see to the left are ones that I did myself. They were put up to hide the ding in the wall where the movers shattered the thermostat. I really need to put one more up there so I'll be looking for another one of those kits. They dont sell them in the stores anymore so I'll have to go to the company's website and see if they still make those particular kits. Last I knew they still made them but not in those colors anymore. I may have to get one in blue, assuming I can get them at all. If not, I'll see if I can get 3 of another style to do and then place those in the office or the hallway upstairs. 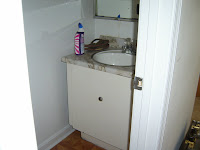 You can see the stairs in this first pic. Im getting better at going up them and as long as Im not making too many trips, my joints dont hurt as much as they did the first week. I still cant carry much up them but at least I can get my fat ass up there without much difficulty. Coming down is still a bit of a problem though. Each step is only 8" wide so even my shoes extend over the edge a little. I have taken to going down them sideways and my knees grind horrible as I do so.

That doorway to the left is the half bath downstairs. It still needs a bunch of work. There was hardware missing on the toilet seat (which I do believe hubby has fixed already) and the vanity was missing a door knob (which I took care of). Excuse the mess on the vanity though. We're still having a slight problem in there. We'd had someone in to give the landlady an estimate for fixing the boarding under the vanity and the cupboard under the kitchen sink because I'd noticed some water damage in both areas. Well a few days after the dude was through with an estimate, we developed a helluva leak under the bathroom sink. We peeked underneath figuring it may be a pipe or something easy to fix and ut-oh...it wasnt. So I called the leasing office to let them know the sink was leaking and no it wasnt a pipe that was an easy enough fix for hubby to do. They ended up sending in a plumber to see if he could fix it. He looked underneath and said that no it wasnt a pipe (oh really?) and that the sink itself was rusted through (gee...like I said the SINK was leaking *sigh*). He'd send in an estimate to the leasing office and it would be at least the following week before anything could get done. Well this week....we got to Friday and we still hadnt gotten a call about this thing. Im really getting tired of having to wash my hands in the kitchen when I should have a perfectly servicable sink in my bathroom dammit. The landlady said that she'd faxed the estimates over to the property owner and she was just waiting on them to make a decision. She also said it was possible the property owner would want to send over her son to see if he could beat the estimates that were given. I dont care...just get it fixed. For all I care the property owner could send the son and he could go to the local Habitat for Humanity store and pick up the nice white vanity I saw there and use that so long as it gets done. Far's Im concerned it doesnt need to be new...just servicable and nice looking and not rusted through like this one is. Ah well. I let them know that coming this next week I was going out job hunting and I'll need a minimum of 2 days notice before they send anyone here to do any kind of work. Period. 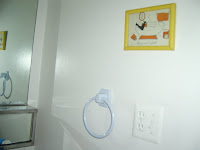 Other additions we made were the toilet paper holder (not pictured) and the round towel ring next to the sink as it had neither. They were cheap fixes. That yellow framed picture you see has a penguin in a bubble bath and under it says "Peace and Quiet". It was one of the items that was in the box of momentos from my gramma's house. It doesnt match anything in my main bathroom as I have a beach theme going in there so it never got put up in the house in Texas. However, here I have another little place to put it so I think Im going to add any additional decor as a suppliment to that picture. Maybe some black, white and yellow towels for that room....or orange...eww. no not orange. *shrugs*
posted at 3/29/2008 01:09:00 AM

Those pictures you did (covering the ding and missing thermostat) look really neat.

I like the little penguin picture...nice touch. It's unique and sentimental.

Thanks iggy! They were a kit I bought at Michaels when the store was clearing out discontinued stock. If I had any indication I would need a third I would have bought it. The kit was great. It had the canvas stretched on the frame already with the pattern printed on it. I called it "paint by no numbers" LOL. They gave you the paints and showed you how to mix them for the colors. The paints were definitely different than the acrylics I was used to working with (these ones came in tubes and not bottles).I did tweak the pink one because it called for a burgandy outlining on the butterflies and I hated it so I redid the outlines in black to give it a "retro" feel.

Alice: thanks. Yes very sentimental. There are a few decorations I got from that box from grammas. Some...well...I dont believe will go up (goodness where'd she get some of those things??) and others that will. I miss her very much.

I agree with Iggy, those pictures on the wall are nice, too bad they were discontinued.

I think I'd replace more than just the sink in the bathroom, lol. Looks like something leaked from the cabinet, or whatever it is, above the sink? That looks about 40 years old. (who puts flip flops on the bathroom sink? lol)

Cute Penguin picture, black, yellow and white towels would be cute, bringing out the yellow in the frame.

Oh and those stairs don't look very deep. As many as there are, you'd think they'd make them so more of your foot fits on them. Too easy to fall up or down.

*nods* it is too bad but Im creative enough to fix that problem.

Yes I see that. The townhouse is a 1976 model so it's likely that is the original piece. They also have had not so good tennants in if you recall (remembering a comment about these rugs....)...the last tennants, we suspect were just grateful to have a roof over their heads.

I put flip flops on the bathroom sink when the sink's broke to remind me to not use the sink and to keep them out of the reach of Dharma who likes to wrastle with things like that (she's ruined a couple pairs already and this pair was more expensive).

*nods* with the stairs...you'd think. The people that put those in are the same ones that put in a custom window in the kitchen so we cant buy just a standard size blind to put up (would rather have the new ones than to have to clean them but whatcha gonna do?)*shrugz* all I can do is take and see how much for the custom blind and pray to God I dont fall down the stairs.