It's getting there, but damn Im tired of screwing and pounding 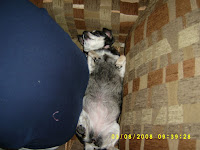 So last Saturday, we did nothing at all in regards to the TH. Both of us were beat and my legs were acting up. Not sure what's wrong with them but I'm keeping an eye on them to see if there's any changes for the worse on them. I suspect it's mostly because we've been eating out ALOT (which means much more salt than I normally would consume) and Ive been on my feet for hours at a shot. Im hoping by staying off them for a bit they'll get better. It's next to impossible though with a staircase to navigate on a daily basis. Anyhow, all of us really needed a rest so that's what we did (yeah the dog climbed behind hubby like that and just got that comfy all on her own). 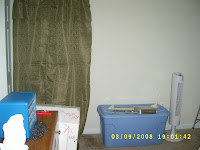 Sunday...I'm blanking on. The camera date on the pix says we spent time in the TH though. I'm sure we hit WalMart for supplies but I cant be for certain whether it was before we went or after. More than likely it was after. I know we've practically been living there lately. Time was definitely spent in the TH though with me attempting to put together the kitchen (which was almost set to go until a couple of days ago..now I got loose ends all over my counters again). 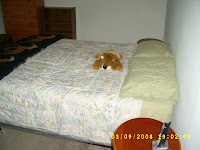 I'm sure Sunday was an 8 hour day here as well. I started putting the curtains up but discovered one of the packages of curtain rods for the bedroom was missing the brackets. It may have been that evening we went to Wally World for like the ba-zillionth time...this time for a new set of double rods (kept the first set as the rods themselves can be used separately on single brackets for in the spare room and the office). I have absolutely no idea why they called for a dual bar in there. There is only one pocket on the curtains and the valance is attached. You try and put a dual rod in there and the curtain wont wrap around the window and keep the light out. I did manange to organize quite a bit in the room (until we brought the stuff over from the apartment) and at least we had a nice place to sleep...and the bathroom was looking ok 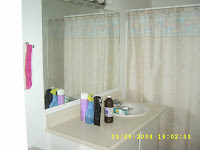 and even the office where hubby spent most of the day was coming together. At least the office was to the point where the Comcast installer could come in and do some work (remember the last entry said we rescheduled because he was running late and we really didnt have the place put together enough anyhow). 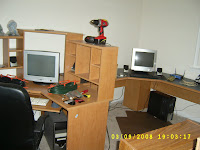 At least the most important rooms in my house were nearly set...well until Tuesday when we brought the rest of the stuff over and the other additional things we wanted that we got at Wally World. Now the sections pictured look a tad chaotic again. Just a tad though, not as bad as the storage room 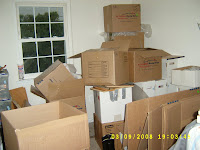 . The livingroom looks just as bad because many of our bookcases got ruined in the move. Granted they weren't the best quality but you do expect professionals to do a better job than they did. We're still finding hidden damages as well so it wasnt just the loaders and unloaders....it was packers as well. Needless to say I dont plan on using ANY of these companies again. Thankfully we have 9 months to file a claim, plenty of time to get everything at least checked out even if they dont get unpacked totally.
Monday. Comcast day-part deux. We got up at 6am so we could get some breakfast and go to WalMart for the curtain rods I needed and a few other things. While there I decided to get another valance for the kitchen window. I had 3 for the 3 windows but with as narrow as the side 2 are, it would have looked funky if there wasnt as much gathering at the top of the valances in the middle as the side windows. 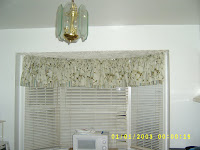 It took me about 30 minutes to put the second curtain up in the bedroom and about another hour or better to get the valances up. Why so long? Because Im terrified of using hubby's power tools so all building I do is done manually. I start a little hole with a nail and hammer, then I put each screw in by hand (hence the title of my blog....mmm hmm I KNEW what you were thinking...you pig!). It takes a while and I manage to work up a good sweat, but I get 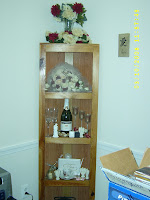 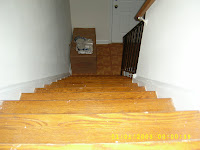 Hmmm. Now that I see it how they see it, I can see why it's scary. This pic of the stairs was clicked at about their head level looking down. No wonder neither likes it. I know I aint fond of it and my head sits a HELL of alot higher.
What else? Hmmm I know Im forgetting something yet for the life of me I cant remember what it was. I guess that means I better close this and get my butt to bed.
posted at 3/14/2008 03:03:00 AM

My goodness, thats a blog entry and a half! I was thinking there is a backhoe around your area for sale... in case you need to bury the cable....dude.

I never saw a cat that wouldn't go up or down stairs. My Mom's cat jumps onto ledges that would freak out Batman and Spiderman. I hope they get over the stair-phobia soon.

Hope you and Ranger get some rest too.

One blog after another has me in hysterics tonight!

Ya know...even in the house that cat wouldnt jump on the counters. When little she'd get on the back of my office chair but doesnt even do that anymore either. Only time I catch her on a desk or counter is because I left something nearby that she could climb on and get to the counter or desk from there. I certainly hope she gets over it soon.

Wowsa that's a longgggggg way down! You get some rest hun. and Ranger too. Get it liveable for now and unpack slowly. You don't need to be getting sick!

Sorry I haven't read your blog before this. I've had some major problems with my computer (and still am). I clicked on your blog at one point yesterday (i think it was yesterday morning before work) but saw the length of it and clicked out of it. LOL (didn't have time to read it all so didn't start)

It looks like you're getting your new place all set up. The cat will adjust to the stairs soon. Am almost sure of it. Good luck with getting the rest all set up the way you want.

(btw, i think i parked that backhoe in the cow barn) *winks*

No worries Alice. I got another entry I started but danged if I really feel like typing it as I know it may end up as long...

Someone went and laid a bunch of Easter eggs on your blog overnight, Styxie. :) Love it!

The Easter Bunny came early! I bet it was because he was afraid some little kid would eat its ears off. :)

Neat and colorful. Me likes.

Thank you thank you. I figure since Easter is this coming weekend I'd get decorated. It's just a shame that Easter is so early this year because it means the decor will only be up a week.

Oh and what child is going to eat the bunny's ear off with that bad bunny I got on my profile pic?