just chattin on the weather

Someone was wondering a week or so ago (was it Alice or Karla?) if I had gotten some snow out of the storms that had been in the east. I'm happy to report that yes, I did INDEED get some snow. Not the foot or so that I would have LIKED to have gotten but a modest 3" or so. I've got the pictures posted here: http://s4.photobucket.com/albums/y103/ladystyx1969/February%202009%20storm/

I've got descriptions under the pictures in the Photobucket so I won't go into too much detail here. We did get some strong winds on the 26th of February that managed to do some damage in the neighborhood. Our townhouse didnt get any damage that I know of (at least on the sections of house I can see without invading my neighbor's yard), but the one neighbor's shed had some of the siding ripped loose. I've let them know about it through their kid (dang ESLs , thank goodness the kids understand me), and showed them the picture I took of it. He climbed the fence (yeah that leaning piece of crap, Im surprised it held the husband's weight because he's very stocky) to take a peek and supposedly is going to let their landlord know (neighbors and they dont have the same landlord...wish they did because I would have just dealt with it myself).

Friday the 27th we had snow. Hubby actually had to shovel the back patio so the dog could go out to go potty (she doesnt like the snow and wont walk in it if she can help it). Like I said the pictures are on that link in Photobucket. I did post this one because I like how it turned out. 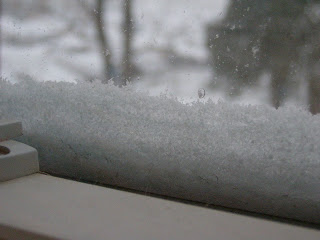 I'd noticed while taking a picture out of the bedroom window of the snow on the truck that there was a white blur in my viewer towards the bottom of the picture. I figured that maybe I'd get a shot of the snow on the ledge and see how it turned out. Sweet!

We had 70 degrees on Wednesday. It was so beautiful I was out without a jacket. By 6pm it had dropped 10 degrees and has steadily slipped in temperature over the last day and a half. It's in the low 30's right now and we're getting snow again. I've actually gotten enough cold weather this year to be amply satisfied. If this is the last of it for the next 8 months or so, I'll be content. Yeah, I'm ready for some slightly warmer temperatures now.
posted at 3/13/2009 07:11:00 AM

I am definitely ready for the spring weather too. Here's hoping it comes quick!

Glad you got some snow in the end. :)

HOW PRETTY! I love snow, but I am so done with it!

Hun? Is ChicagoLady ok? No new posts in a week....and her last post said she was sick. I'm kinda worried about her.

we were having summer but someone sent us cold weather again!!! Glad you got your snow!!

You and me both, sister!

We just finished with a bout of nice weather too. I really can't wait for spring.

If you're ready for spring after the little bit of snow and cold you've gotten this year, imagine how the rest of us feel!