Here are the pictures I promised awhile back. 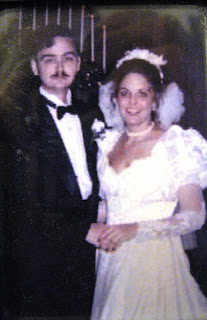 A picture of hubby and his sister on her wedding day. Such a skinny young thing. He must have been in his mid 20s here and was rocking a Clark Gable-ish look. Well, at least that's what he looks like to me with that mustache he's sporting.

As you can see, the man rarely smiles unless he's threatened. 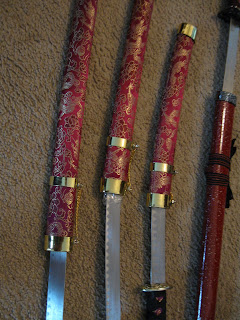 These last few are of the swords we picked up at that flea market we visited during our TN trip.

Gonna make this one a short entry as we've been out all day and I still have a ride to do and laundry to fold and dinner to warm up. Tomorrow we're going out to do a bit of shopping. I think I'm gonna go load up on some art supplies. I want to paint a couple more of those butterfly pieces but I'm gonna have to fudge them because you can't get the kits anymore. I also clicked a pic on our trip that's inspired me to try something. It may end up like shit, but then it may end up awesome, who knows. 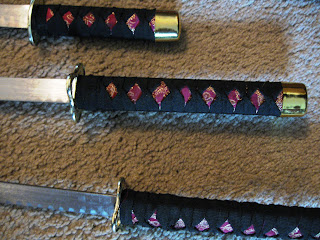 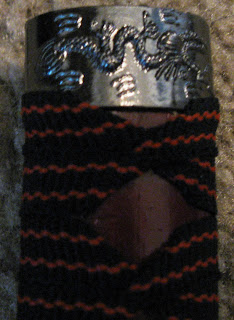 While we're at the craft shop, I'm going to see if they have any of the little plaster kits that I loaded up on at Michael's a few weeks back. I've got several more entries coming up in short order. One of them will look familiar to Dorkys. I figure it'll be a great way to rehome some of the stuff I have here. Cheating, yeah a bit, but it IS stuff I did myself so it counts, right?
posted at 7/30/2009 06:56:00 PM

I checked out all your blogs but this is still my favorite :-)

Hope you can find everything you want for the craft projects you want to do.

Maybe your hubby ought to greet the next few people at the front door with a couple of these blades on him...

Glad your getting back into being creative! You do such wonderful works of art. :-)

Cute pic of the hubby and his sister.

Nice collection of swords. The end of the one is very detailed.

I hope you found what you were looking for at the craft shop.

Cute hubby and cool sword. I meant the swords you bought, get your mind out of the gutter.

Are those specific swords that hubby wanted or liked?

Wow, you can really tell hubby was a geek back then, lol.

But he's YOUR geek!