If Im bored, where the hell is my day going? 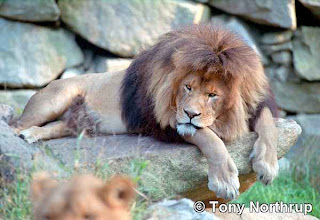 Again filed into the "picture says 1000 words" category. Kudos to the photographer on this one. Pretty much the way us Leos look when we're bored.


Bored, bored, bored....Yet for some reason my day flies away and next thing I know it's almost bed time. Where does my day go? Well it's mostly spent online reading emails, blogs and working on my MySpace. Nothing really exciting going on.

I got a call yesterday from my SCSis. She wanted to thank me for the tee-shirt I picked up in NYC for her. I had planned on picking up something nice for my TxSis as well while I was in Charlotte on my layover but we all see where that plan got me. Well SCSis was so happy when it arrived on Monday that she wore it to work yesterday and plans on packing it when she goes on her trip to visit her daddy at the end of the month.

Got a call on Monday from hubby while he was at work. Seems his buddy on the night shift wants to swap shifts for a bit as he's never seeing his wife (she works mornings M-F) anymore. I'm kinda torn with this as it means I'll see less of my hubby but then the wage differential would help pay off the credit cards from our trip. *sigh* I guess yesterday they decided that the switch will occur for just a month for now and will start July 8th. I told him no way in hell because friends (WHOOOT! SQUINT!!) were coming to town on the 7th ( a Saturday night which means yours truly is playing hookie from her stream again ) and dammit I wasn't missing visiting with them again. The last time they had been in town was in November or December last year and I was just coming off surgery and couldn't get around much at the time. I reminded him today and he said he's taking the 7th off so we can go (early BDay gift!! WHOOT!).

Got a thank you card in the mail today from my godfather and his lovely wife. When we were visiting I noticed they had a collection of lighthouses and decided then and there that one of the ones I painted was going to then. I reminded hubby that his family just shuffles money at Christmas and that maybe these lighthouses needed to go to other homes instead. This is one lighthouse placed and one to go. I already know where I'm going to send the other though. It's just a matter of time.

Got an email from a friend that I hadn't heard from in a long time. Only emails I had been getting are those forwarded jokes to let me know she was thinking of me, but nothing substantial. The only news I get about her anymore is through the grapevine. Man I hate getting news that way. I also hate when people get news about me that way...I'd much rather if they want to know what's going on or if they have new they want me to know that they drop me a note. Dammit you have my email... you just proved it. No, I'm not mad...just a bit irritated about it. Well anyways her email was telling me that she's moving at the end of the week. I wish her all the best.

Speaking of emails...I'd gotten news through the grapevine (damn didn't I say I hated news this way?) that a mutual acquaintance had had a death in her family a few weeks back. As much as I hated the fact I didn't hear it from their own mouth (ok so in this case since we dont really talk the grapevine is the only way to get news and this is the type of news I needed to hear), I still did the right thing and sent a grievance card. This one is another that occasionally sends an "I'm Thinking of You" forward and nothing substantial ( I think in this case it's because she forgot to take me out of her group for emails). You'd think I'd at least get an email regarding the card. No I'm not wanting a thank you because it's something I'd do for anyone else ...just a simple acknowledgement that it was received. Ahhhh well. Maybe it's just me. Maybe it's the way I was raised. Sheesh I got a thank you card for my thank you card and gift from my godfather. More people need to be raised to do that.
posted at 6/13/2007 04:35:00 PM

Damn, I can't make up my mind which one I want to bookmark, lmao

LOL...all of them? Home page isnt going to have too much. Comments about news articles I see....which blog has new stuff. If you're looking for the 360 stuff it'll be on this page.