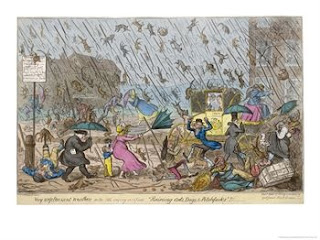 Well at least the weather is appropriate for that Evan Almighty film. The weather was so bad yesterday that I had to shut my computer off TWICE because of lightning. Worst part of the day came around 830pm when I was catching a House episode I missed and the power decided to go off. Not just solidly off at first...off, then on, then flicker flicker and bam completely off. Meanwhile, I ended up wasted some of the meatballs I cooked because I was in the middle of scooping them from the pan into a dish to store them. %%**)$$(*^& *sigh*. Thank goodness for a small generator that can power the travel tv. According to the news, we're all under a flood watch until noon tomorrow. Possibly later. I hope we dont lose power again...if it does I hope it at least waits until after 8pm again because I have to cover for my TxSis's stream tonight. I hope I dont have to call da boss and inform him otherwise. The power was out for about 3 hours. I aint bothering to fix any of the clocks right now on the off chance we lose power again. This wont surprise me with the way those clouds are looking today.

For those of you who were watching those videos I posted day before yesterday and were curious who was who, the following is part of the comment I left for Chicago :

The picture on the gravestone was their wedding photo. He was coast guard and she was army. The young man holding the boy in the second photo is my brother and the little one in his arms is my nephew. The fourth pic in...the man in the middle with the suspenders is daddy. The 5th pic...the lady on the left is a cousin (she's bro's godmom), the balding man in the center is my godfather (friend of the family) and the lady on the right is his wife (my godmom isnt his wife it's actually his sister and I dont see a pic of her in here....). Next pic in...the gal with the pink purse is bro's godmom's daughter.The first group shot of the table of people, the gal in red with the glasses is my bro's wife (the one Ive been referring to as my SIL). The older man in tan with the glasses I *think* is George. I cant remember how he fit in all this, I just remember he was important to gramma (gramma's sister's hubby's brother I think) and was close with her. The rest in the buffet section of the pix Im not sure about. I know most were relations of some form or another.

I got a call today from the place doing the CT scans on my husband and me. We're scheduled for next week on the 5th @ 8am. Im going to call shortly and schedule my obgyn. By day's end, if I havent heard from the therapist's office I'll give them a jingle and set for next week.

I kind of had an idea that your dad was the one in the suspenders, lol. Thanks for the confirmation.

No prob...he was the one in the suspenders in the wedding pix too ;). Daddy's all belly and no ass (damn that sounds like ranger...) so a belt doesnt work so well on him (God please...no suspenders on ranger!!).