decorations, gifts, and something else

So far, most...not all, of the niece and nephews' gifts have showed up. Im just waiting on one more thing for a couple of them. Im not sure I'll be dealing with this particular company again. I would think that if you order from one company that the stuff would all arrive from one place...especially since it says NOWHERE on their site that the stuff will be coming from anywhere OTHER than the location listed on said site. So needless to say, the gifts (which I'd hoped to have this week to pack and ship) are coming in piecemeal. We had to make 2 trips to the UPS Store to pick up packages this week...actually 3 because hubby went just yesterday too. Well one of the trips was on Saturday. 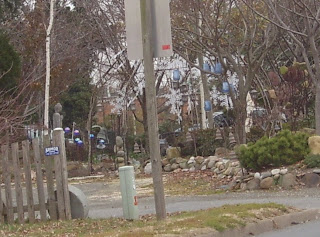 The house with the white bikes was pretty much decorated up nicely. On the trip home, I wish I'd had the camera ready and anticipated the pretty sight that was going to meet me while coming from the opposite direction. They'd had all the white bikes trimmed out with red umbrellas and bows. Going out to the UPS store, however, I saw these pretty, rather LARGE snowflakes hanging from their trees. 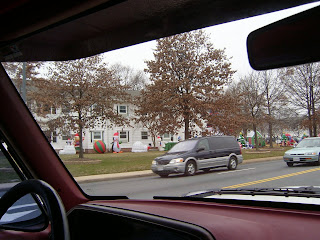 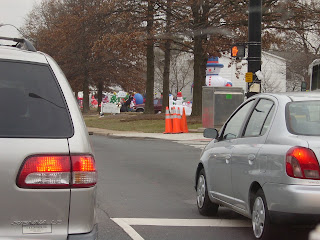 While out and about sometime in the middle of last week, I saw a display that brought to mind a certain someone's blog entry...at this point, it's eluding me who's it was though. Anyhow, I made a mental note to have the camera on hand when we went out the next time. We had cause to be out in that direction again on Saturday afternoon and so I was ready. The traffic was horrid because there'd been a parade in town that morning. Imagine my surprise when I was able to get 2 birds in one shot!! The OCHAs must enjoy a good parade too! You can see behind them the decor I was aiming for. The WHOLE PROPERTY that the rehab center is on is decorated in those tacky inflatable ~things~ (said with a sneer and wrinkled nose). Now I can understand one or two...ok, even 3 because it's a large property.....but there must be at LEAST 2-3 DOZEN of those inflatables in the yard!! The picture on top was taken on the trip back towards home.. 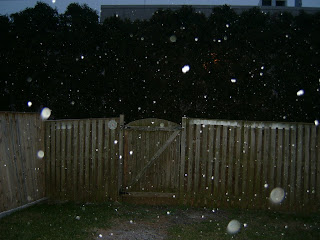 Yeah, that's SNOW you see!! It started Saturday evening after we got home.The first of the season here. I suspect, considering our location that it's going to get a bit worse come the end of December and into January. I got lucky with the shot. The flakes were small enough that if it'd been daylight out, I seriously think that they wouldnt have shown up in the picture at all. However, it was just dark enough that the flash went off and got a few of them making their trip down to the ground. 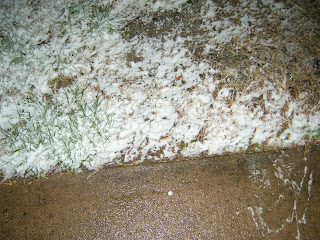 We actually got enough snow that it accumulated. It's really NOT enough for me to be happy yet, but enough to be satisfied for now. I suspect after the one decent snowfall...when I have to shovel my way out to the dryer (which located in the shed) and just a couple more laundry days where I absolutely HAVE to wear my winter gear just to get it done....I really do believe I'll end up not liking it too much. Well, at least until we get into a new place. Im going to insist on the washer and dryer being IN the unit so I can do the clothes in relative comfort.

Good lord - that's a whole parade of inflatables!! No wonder the OCHAs were hanging around looking at them! LOL :)

In fact, call me Scrooge if you want...but I prefer the OCHAs to the inflatables - now how sad is that!

I got plenty of snow to share! Now all I need is some dry ice to keep it from melting.

I liked that even the OCHA's were able to enjoy the Christmas decorations, lol.

I'm with Iggy, I prefer the OCHAS to the inflatables. I shiver just thinking about having to walk through snow to get to my laundry. So far we haven't had more than a few flakes of the stuff. My luck, it'll dump on us Christmas Eve and the kids won't be able to make it home to celebrate.

Doesn't everyone love a parade? :)