Mmmmm part 6: M is for Movies

M is for movies. Most of the time M stands for matinee movies, because they're a bit cheaper and not as crowded. We dont go as often anymore because there's rarely anything the both of us would like to see (or be willing to be seen at considering we dont have kids..), or the feature is too long (I can only site through a 2-2.5 hour movie without getting antsy...strange because I sat through each Lord of the Rings movie the other day without a problem here at home), so most times we just wait until the video comes out and watch them here. The following are my favorite movies and staying within theme they all start with M. 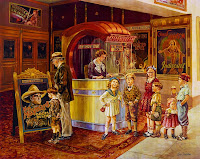 My Cousin Vinny. Have only seen this a small handful of times but it makes me laugh each time. My favorite line is when when Vinny asks the judge if he can declare his own girlfriend a hostile witness...LOL. Maybe it's time to revisit this one... 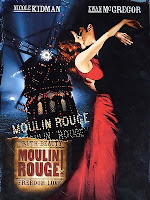 Moulin Rouge. Nicole surprised me because her voice was a whole lot nicer than expected. I like the way they used modern music to set the mood, much like A Knights Tale did. The funniest scene has a reworking of Madonna's Like a Virgin. Trust me, like when iggy reworks the lyrics to a song....you'll never EVER hear that song the same way ever again! 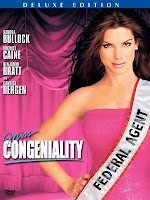 Miss Congeniality. Candice Bergen playing a bitchy ex beauty queen, William Shatner as a relatively clueless show host, Michael Caine as a stylist and Sandra Bullock as an ugly-duckling-turned-swan federal agent sent under cover to catch a criminal....what more could you ask for? Her character dolled up and exiting a hanger to the tune of Mustang Sally and then tripping? Check. Her character not having a clue as to what to do for the talent portion and beating up on her partner infront of an audience to teach self defense (as her talent mind you)? Check. Havent watched the follow up to it yet, maybe it's high time to.

MIB first AND second movies. Love em! Tony Schalub (Monk) as a head re-generating alien is a total hoot. If you must miss one of these, do NOT miss the first one with Vincent D' Orofino (Law and Order:Criminal Intent) as the Bug. You think his acting in L&O is off kilter, his acting in this is a must see. 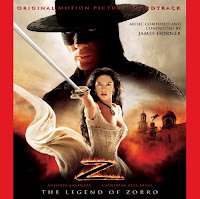 Mask of Zorro. I enjoyed this one alot...actually both that I saw were great. I usually dont sit through dramas as well as comedies so it was a real surprise. Oh and that song on the first soundtrack....*sigh* with Tina Arena and Marc Anthony is simply b-e-a-utiful.

Mummy... first two movies (havent seen the other one yet). I dont generally much get into monster or horror movies much, but this seems to be more action than "lets scare the pants off of some people". Maybe it's the slash and gore I dont like...hmm. Yes, these movies had a couple moments when I was peeking from between my fingers....but nothing like the movie Doom (which found me cowering behind my hands most of the way through....*sigh* they were free tickets though...). A real shame they couldnt get the same actress to play in the 3rd movie opposite Brenden Frasier.

Miracle on 34th Street. The version with Mara Wilson is my absolute favorite. She's a real joy to watch up on the screen. One of my utmost favorite lines comes out of this movie. Im sure many of you have seen my shorthand for it many times. Instead of saying "You're welcome" when someone thanks her, she says "You're Entirely Welcome". I always loved that and started using it in chat....so instead of the customary yw to a ty became a yew.

And representing the animated films is Mulan. A wonderful story of a young girl that sneaks off with her father's armor to go to war in his place.
As with the M is for Men... feel free to play along. List your favorites for any of the categories in their respective blog entries. If you've played the "10 things I love starting with the letter" game already, use the letter you were given....if not feel free to use the letter I was given.
So far we've covered 7 of my favs. Three more to go....
posted at 12/02/2008 04:00:00 PM

I didn't care for Moulin Rouge but the rest were great movies. I loved Miss Congeniality, it's one of my favorites (I love anything Sandra Bullock is in) and I have the second movie laying in the stack of dvds to watch sometime. (maybe this winter when it's below zero outside)

*Takes a deep breath and begins another marathon comment* LOL

I LOVE My Cousin Vinny. I watch it almost every time it's on tv, and that's a lot! It was just on this past weekend. I love the courtroom scene when he's questioning the witness about the making of grits, where the physics of time and space cease to apply in his kitchen, lmao. And of course, there's the famous "two utes" reference too.

I've never seen Moulin Rouge. I might like it, but who knows when I'll get a chance to rent it, since tv shows won't be ending for another 6 months.

Both MIB movies were great. The chihuahua was cute too. (surprised you didn't mention that)

Both the Zorro movies, with Antonio Banderas. Now that's a MAN.

LOVE all three Mummy movies. I too wish the original wife were in the 3rd one, but oh well. It was still a good movie. And Brendan Frasier, he's also a MAN!

Miracle on 34th Street, one of my all time favorite Christmas movies. I love how expressive Mara is in the movie. She's just a joy to watch.

Mulan was cute, but probably not my favorite of Disney movies.

Chicago: I have the second one, just havent watched it yet. Both movies came in one of those 2 movie sets. Divided down, the movies cost less than $5 each so even if it's a dog...the first movie's good and still worth the price. Plus it's cheaper than the cost of seeing it in a theatre. Havent seen it hit the tv yet...maybe Im just missing it.

Oh and Chicago...the dog in the MIBs was a pug named Frank.