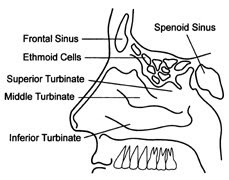 Boy....with everything that went on I forgot to talk about my ENT appointment! Both hubby and I went to the ENT doctor Thursday. Man I didnt like that. They put me in my exam room, I took one look at the chair in there and recommended highly that they put my hubby in with me before they started the exam. They ended up moving us both into the larger room at the end of the hall. Even the extra space in the larger room did nothing for me....it just gave me more space to get away from the chair. I think I would have been ok with the exam if hubby had gotten through it without a peep but that didnt happen. Knowing he's not the type to complain much, just the fact he said ouch when the scope was placed up his nose was enough to convince me I didnt really want to be there. Oh it wasnt a loud ouch...just enough to acknowledge that it was uncomfortable. Being alone would have been worse for me though. The dr said that hubby definitely needs surgery to remove a large polyp and correct a deviation. Unfortunately the deviation and the polyp are on the same side of his nose and that's why he gets so sick all the time. While in there they're going to trim down something called a turbinate (?) as there's some excessive growth there as well (the pic shows 3 different turbinates...the one she pointed to was the one lowest in the nasal passage). It'll be a 2 hr surgery and he'll be sent home with splints in his nose to hold the septum in the right place as it heals. Now this wont cure his allergies...just make them more bearable and less likely to infect on him.

When it was my turn, the dr took one look at the body language and knew I wasnt going to be an easy case. Nope, not at all. And when we mentioned that I nearly broke my hubby's hand while at the podiatrist's office...with my left hand and Im a righthanded person...well she knew it was going to be rough. She was good though. I was given the option of being scoped or not but like she said my case seemed to be straight forward and she didnt believe she was going to find anything else even if she put that nasty piece of equipment up there. I told her, if she really must to go ahead but if it wasnt necessary she might want to not try it. *laffz* Hey at least I was honest about. Now if I can break her of using a tongue depressor on me. It aint necessary...hasnt been since I was 5 because my dr back then taught me how to open wide enough so he could look without having that piece of wood crammed down my throat. Anyhow, she was going to review the scans (damned dr's office makes me the appointment and didnt bother having the scans sent over...dumbasses) but there was only a slight deviation up there ...and alot of pus and gunk. I also have something wrong with that turbinate so it'll need trimming. Yes, I would benefit from the surgery but it wasnt nearly as pressing as my hubby's case. She says Im on some really good meds though and if I can keep it in check we may not need to do anything. However, next time the sinuses go bad she wants to know. You can guarantee Im going to fight this tooth and nail. She did ask me about my tonsils and I told her I did get sore throats now n then and that a previous dr said if I kept getting them he was gonna yank the tonsils. Why do I foresee this in my future..?

Got a card from my NYBro today for my birthday. I had to laugh as he knows me way too well. 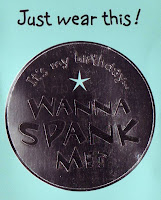 The font color is easier for my old eyes to read now...looks nice and sharp.

Cute card...when is your birthday?

Thanks Alice. Im not overly fond of yellows and oranges usually. I normally keep to the pinks, purples and blues (see my MySpace page) but those colors really dont match the theme I have going right now. But yes I agree the contrast is better to read with.

This Friday. We're going out of town to catch that band while they're in Tyler to celebrate.

Do I want to ask what the result is of excess growth on a turbinate? LOL The lowest turbinate in the picture is the inferior turbinate, so maybe the excessive growth is because it doesn't like being inferior to the other turbinates?

I dare ya to wear that birthday button to go see Squint! J/K I know you'd do it!

The excess growth also prevents proper drainage thereby promoting backups and infections Im guessing. I never knew it was an issue but I guess she nose (knows...yeah I went there) what she's talking about.

LOL @ the growth being due to being tired of being inferior. This makes it an inferiority complex right?

Oh...and hell NO on the button. I dont know them well enough to do that. Now if we were going out with our friends Bill and Julia....and in a place where I knew enough people....well then maybe ;).

LMAO, only the nose knows! An inferiority complex with an inferior turbinate...would that be similar to a double-negative, which means it's not really inferior?

If that's the case, perhaps it just WANTS us to think it's inferior so we'll underestimate it? Or is it twice as inferior and it's using reverse psychology on us? Damn....now Im all confused!!

LOVE YOUR BLOG:) ugh dont talk to me about dooctors I get heart surgery on the 10th ugh!

Thanks Tori. Like I said in the comment to Alice, it's not my favorite color but it goes well with the theme that's running right now. Once I get out of the phoenix theme, It'll change up again. I kinda like having all 3 blogs with the same motif right now though. Of course if I change them up the theme for each blogpage would set the mood......*shrugz*

Thank you kaylee. Sorry you're having medical problems. You'll probably be hearing alot of dr stuff from me in the next few months though, just fair warning. Hope your surgery goes well.

thanks hehe okay that s okay I am used to doctors:)