new vanity and a flea bite

A few weeks back I got a call from the repairman. I think it was the day after I made a crack in someone's blog about them being lucky that their stuff is repaired in a timely manner. It seems the owner of the property *finally* said the stuff could be fixed.

I was looking back to see if I mentioned that they had sent a repairman for measurements...another one, not that first guy when we first moved in. Well, after several months of waiting and bitching, they'd sent a second dude to take measurements. It was a Wednesday afternoon. He told me that generally when HE says it needs repair, it'll get done. I guess they'd had problems with the last guy. Anyhow, we got talking and he had been under the impression we'd only been there a month or so...he was surprised when I told him how long this stuff had been waiting. I told him that I realized it wasn't the landlord's fault but the property owner's and I also stated that it was my opinion if you couldn't afford to fix the property you were renting out to others that maybe you should consider selling it to someone who could. Now, if you own the place and are living there...AND the repair wasn't really threatening anything in the home (sure enough the vanity and storeroom out back weren't exactly emergencies, just inconveniences), then by all means wait to fix them. However, if people are paying you good money to live in your home....well then everything should be in working order...period. Mind you, if this had been an apartment complex...you can be sure I would have been reporting it to the BBB.

Anyhow, so the new dude comes in and gets the measurements and assures me it'll all get done. He even goes to say that he'd see if he could get it done that week (remember, he came in on a Wednesday afternoon). Thursday, no call.....Friday, again no call. Okay, I didn't really expect that it would get done that week anyhow because surely he had other places that needed doing as well. The following week, I stayed close to home...just in case. No call. Another week goes by, and still no call. It got to be 3 weeks and I pretty much decided I was going to call and raise hell on Monday. Friday afternoon, just as I was making the decision to really piss some people off about this...the repairman called. (insert small eyeroll here) He said he'd be in with his crew on Monday around 830-9am. Hubby wasn't too happy because it was the Monday before he went on nights and he really needed to be sleeping in the day hours to get his body back to the night schedule. LOL. Ah well. 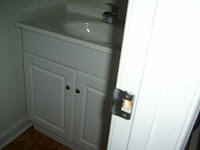 They showed up on time on Monday. All repairs were done in about 4 hours time. We now have a shed with a door frame that's FIXED so it'll lock, a brand new vanity AND a screen for the sliding glass door. The only reason it took so long on the repairs is because when he was in for measurements, he'd just eyeballed the patio door instead of taking an actual measurement. *shakes head* Never EVER assume that things in homes are built to "standard".

Trying to keep myself occupied over here. I've freshened not only my 2 busier pages here but my MySpace as well. While I was at it, I switched my SCSis's MySpace back to her off-season monkey decor (she's a rabid Yankee fan). I had an interesting project show up last evening that kept me occupied for an hour or so....actually longer now that I think of it if you consider I had to "shop" via Google. It allowed me to play with a program that I don't normally use over here. Now that I have the hang of it though, I may play around with it more often!

I've caught several movies the last few weeks. Some I've seen before and a couple that....well I never would have thought to watch if they hadn't been on TV. I popped in The Emperor's New Groove and Kronk's New Groove one day just for some noise. Lord knows I've seen them both several times. I also watched The Wild and Ironman over the last week or so. On TV, I caught the first two Pirates of the Carribbean movies. They were better than I expected. That Johnny Depp's a real hoot. I got so I didn't know whether I wanted to cheer for his character or slap him across the face. There were some really funny moments in both of those movies.

So.... last week's shots went a whole lot better than they have been going. Infact, this week, there was minimal to no reaction at all. The lump was no bigger than a flea bite and hardly itched at all. Now, either the Aveeno hydrocortizone is really working... or my body is finally adjusting to the medicine. You know what the shocker is? We had increased the dosage from a .15 to a .2. Now with every other shot, the reactions had gotten worse and worse...even when we reduced the dosage. This time, however, it's the complete opposite. *shakes head* I can't wait to go in this week for my shot so I can tell the nurse.
posted at 10/05/2008 04:45:00 AM

Owning me own house I put fixing things off, I dont know why, the money sits in the bank (I have a seperate stash for repairs), but it takes me yonks to get around to getting the little bits and bobs sorted.....

But, you have spurred me on, today Im going to write a list of all the many little things (cos they are just tiny) that need doing and actually get it sorted..... so fanks for that, like I aint got enough to do LOL

I'm glad you finally got the problem areas fixed. The vanity looks nice.

I loved the "Pirates of the Caribbean" movies, and I agree with you on Johnny Depp being a hoot in those movies. LOL

Good luck with your next shot. *hugs*

I'm glad your repairs are finally sorted. I agree with you about the "if someone's renting from you then all repairs should be sorted" thing. It's different when it's your place and only you're affected.

We rent from the council and they take forever and a day to do even the simplest of repairs. If it's serious (like a gaping hole in the roof) then they'll sort it quickly, otherwise... Get ready to wait! We've been waiting since moving in - for example - for the skirting board in the bathroom to be replaced. It's missing (was missing when we moved in) and we pointed it out right away... That was about 7 months ago. And yet they've been to fix a couple of other things that were a bit more important.

I've never seen the Pirates of the Carebean movies. Kelly likes them, but I've never watched them.

Glad you didn't get as much of a reaction from your shot this time. Good luck with your next one.

TY Alice and Tori. Im sure the nurse is going to have a field day with the nonreaction!

You may actually enjoy the Pirates movies Tori.

You've definitely waited long enough to get stuff done. Glad it's all finally been taken care of. The new vanity looks very nice!

I've seen all the Pirates of the Caribbean movies, but the first two were the best, IMO.

I'm glad your reactions to the shots have started improving. I'll keep my fingers crossed that continues.

Hmm.. instead of cleaning my bathtub maybe I should just get a new one - and get one all nice and sparkly and clean like you vanity.

I only saw one of the Pirates movies (twice as a matter of fact) and was only looking at the woman actress, Keira Knightley... you mean the guy was Johnny Depp? :)

Good luck with this week's shot!

Yes...the one (Jack Sparrow) was Johnny Depp. If it wasnt for the goofiness of his character I wouldnt have noticed him due to Orlando Bloom being there ;D ~sigh~