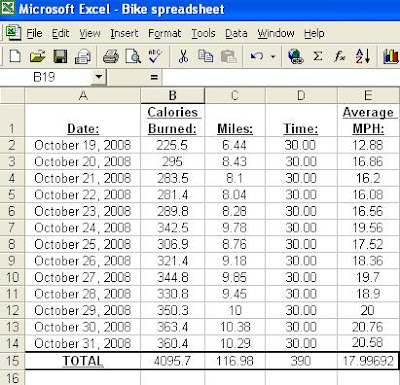 Ok. I've hit day 14 now and Im doing rather well. Starting tomorrow I'll be putting the tension on level 2...a half step up from where it was set. It'll all depend on how my knees are fairing whether or not I keep it set at that level though. My right knee's always been a mess so any pain there is pretty much expected but if I develop any stiffness or pain in my presently ok left knee , I'll have to back it back off and mention it to the dr.
I got a Thank You note from my gal in NJ that got married back in August. Seems I made some points with the new husband with the gift card I chose. You see, in July I'd asked her where she was registered so I could get a gift or if she was pretty well set householdwise. She said she was set there and had gone on to say how she wished everyone had thought to ask that. Considering I'd been through 2 weddings of my own and had attended a couple others, I just figured it'd be a good idea to ask, especially since we're not living in our mother's or grandmother's eras and for the most part pretty much already have households set up before we get married. Well she gave me a list of places they like to shop at including GameStop. I figured...if the bride's gonna give me a left of center, off the wall, non-traditional place to get a card from then that's gotta be something they really really WANT as opposed to kinda sorta need right? So that's the option I took. From what she was saying, when they opened the card and her new husband saw that $50 card from GameStop sitting inside it.....his eyes just lit way up. I dont think he was expecting something like that...not at all.
Tonight's been quiet here. I half expected with all the kids in this subdivision that I'd have rugrats beating my door down for goodies tonight but it's been silent. I have a hunch that several had parties to attend because I havent heard the video game next door for more than 20 minutes all night (thank you Lord) .
Guess I'd better let this go for now. Now that Im writing daily, I want to make sure I have something to write about so it's not just all biking stats.
posted at 10/31/2008 06:56:00 PM

Interesting that your friend and hubby mentioned GameStop. Do you think she plays video games too? Or was that more of a "for him" gift?

Nope...was a joint gift. Her exact words after thanking me for it (and letting me know he appreciated it too) were: "We're deciding what game we next want to buy."

Now there is some smarts - picking the "left of center, off the wall, non-traditional place" to get the gift. I'll have to try to remember that.

:) Your clothes are going to be getting baggy soon - you better start planning a shopping trip.

I'm thinking you can't go wrong with a Van Ness baggy blue sweatsuit... or an OCHA Orange one...

My Mam and Dad did something like that for Carl and Rachel. Except they split it in to a voucher from where they know he goes most and one from where they know she goes most. They figured they can either use them on themselves in their favourite shop or use them the other way around... Whatever they want. I'm pretty sure they did get spent the way they were given though, if you know what I mean.

Was pretty quiet with kids here last night too. I was wondering about the party idea myself.Hope you don't end up putting the bike back down to 1.5

Such a thoughful present! Seeing your table, you have a lot of discipline! Keep it up!

Whoop, er, maybe a bit of an overload on the exclamation marks. I can't help myself. I need some punctuation therapy!

It is cool seeing the stats in chart form - really hits home how far you've come already!
My nephew is getting married in January. I'm going to remember the left side, off center (or however you put that lol) thingy. It may not be a hit, though. I've only met his wife-to-be one time and she seems a bit stuffy for one so young. Yep, just the thing for Auntie to do, stir things up a bit. Maybe a gift card to Passions would be the ticket ;)

Like I said, I'd been through the wedding deal twice myself and the last thing anyone who already has their home set up is more housewares (unless they're looking to replace or upgrade some of the items, then housewares stuff is a good idea).

Goodness I hope so iggy. *chooses the Van Ness blue with the OCHA orange #4...I look ghastly head to toe in that shade of orange* The pitiful thing is that I *just* got a bunch of secondhand clothes from someone who'd lost a ton of weight. Looks like they wont be too long in my closet! Hmmm...also means I better save the rest of the box of them that didnt fit right away because they just might pretty soon!!

No worries Jess!! Im the same way at times! LOL ;)

I think I'll be posting a chart every 2 weeks punkn. We had one for October because I only did it a half month. This next month will have one half full and the other completed. There ya go...stir that pot right up punkn! Passions, Vickie's Secret any of them. It's possible she was a "a bit stuffy" because she was uncomfortable and not sure how much of herself to let shine through? I know Babe's folks probably thought the same of me the first couple times we met. Didnt help that he brought me home that first Christmas we were together....and we'd only been under the same roof for 4-5 months. Anyhow, a giftcard like that just may warm her up a bit (or embarrrass the crap outta her...). :D