Catch up, stats and a pic 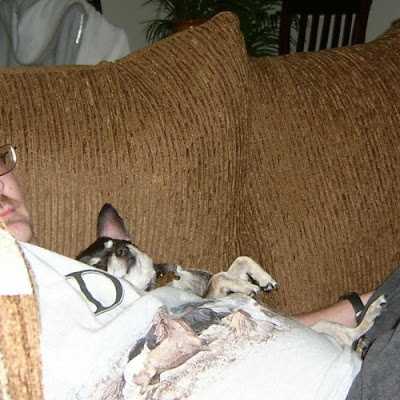 It seems (even though she knows better than to do this) that my dear friend Chicago over at I Don't Care What You Say Anymore, This Is My Life has decided in her infinite wisdom to TAG me. *sigh*. So anyhow, the object is to go to the 4th folder on my computer and pick the 4th picture. However, since I have several folders within folders both on my computer and in my Photobucket, it can be rather awkward trying to figure out which one to pick. Thankfully, I do most of my non-American Idol day to day blogging on the laptop that's in the livingroom. It makes selection a bit easier as there arent so many folders that would contain pictures on it. The above photo was snapped last January while we were still living in the corporate apartment. We'd just finished supper and hubby had spoiled the dog *again* with scraps so she was very full (proof was a huge belch from her later) and ready for a nap, so that's what she did. He stretched out on the sofa to watch tv, put her up with him and she fell right to sleep....belly up.
ride stats:
January 23, 2009
Calories burned: 360.40
trip miles: 10.29
ave mph: 20.58
January 24, 2009
Calories burned: 354.6
trip miles: 10.13
ave mph: 20.26
January 25, 2009
Calories burned: 369.70
trip miles: 10.56
ave mph: 21.12 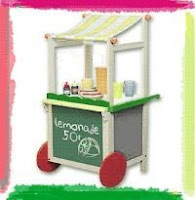 I seem to have won this award again. Third time. Somebody upstairs must be trying to tell me something.... Actually, I suspect I know why it keeps showing up.
Anyhow, thank you to Melissa over at The Scholastic Scribe: The Bling That Refreshes for the lemonade award. Pretty much everyone I read has received this awards already so Im not going to issue it out. If you read this blog and have not received this wonderful award, please feel free to grab it for your very own. We all have our own problems and deal with them in our own fashion. Sometimes we share, sometimes we dont but in any case...we all make lemonade out of the lemons we're given.
Im gonna close this out for now. I *just* got an email from my SCSis and the news aint good there. *sigh* I do have a few more entries that I've got bouncing around in my brain...I've emailled the links to myself and I'll eventually get them posted. This is just a very tough time of year for me and with all that's going on in my loved ones lives....well it isnt conducive to my emotional well being.....
posted at 1/26/2009 06:12:00 PM

Sorry you're going through a rough time.
(((Hugs)))

Good job on your workouts! You are encouraging me to wanna work out!

Cute picture though, and congrats on the award once again!

Congrats on the award and on the bike riding! You get lemons and you just keep plugging away - Folks are going to be calling you minutemaid or something.

That pooch of your (hubby's) really knows how to chill out huh? LMAO... gosh thats one happy doggy.

With all the lemonade, you can open a neighborhood stand and make a fortune selling it! One of these it WILL get hot out.

Hugs, and if you ever want to talk, you know where I am.

I know how you feel about tags and memes, but I thought this would be an easy one.

Sorry to hear things aren't going too well for you and some of the people you care about right now. Hope things improve soon. *hugs*

Congrats on the award and bike riding! :)

*wonders if Ranger was asleep too*

Hope things get better for your SCSis...*hugsss*

Nothing like a Doggy Belch, is there? And ya gotta love lemonade...I think the award is so popular nowadays because we're in the dead of icky winter, no?