WTH is a Pooka and why would anyone wanna do it to (or on) the family vehicular transport??

Oh...and whom ever sent the precipitation? Ya sent it a bit too far north again. Not by much because I could sit there in the truck and watch someone else get what I've been craving. *sigh* 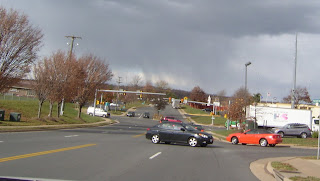 It kinda makes me wanna be back in NY...specifically Fulton where they woke up to this on Monday morning: 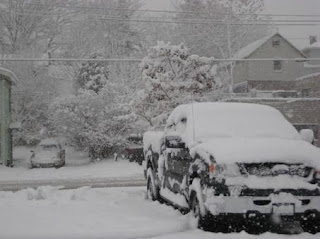 Got another of those "Send a card to" emails. I thought for sure I had told this person that the information was incorrect when I wrote about something else. To make my point, I emailled the correct info to them that I had sent Karla....but I made sure to hit "Reply all" to nip it in the bud. I really hated having to do that but they'd been warned about sending misinformation more than once and I told them the next time it happened I would do just that. *sigh*

Can I blame my cranky attitude on the additional medicine? I've noticed a behavior change since I started using it and it's gotten worse since I had to double my dose. I shudder the type of bitch I'll become next week when I go to 3 pills a day. It feels like the same kind of cranky I get when I havent eaten much all day (which means a lower blood sugar). If it doesnt right itself, I'll make sure to mention it to the drs (obgyn and the PCP).

I can't send you what I didn't get. All that snow was north and east of me!

I saw a plate tonight on the way home, but it was dark, and I didn't have my camera anyway...it was "DISTRBD" Didn't want to get too close to that guy, lol.

*Backs out of the blog slowly, with my head down, acting meek and obedient*

I had something simular happen with snow recently... It wasn't quite as close as that, but litterally a couple of miles up the road they had snow... But not where I live.

One of the side effects from Metaformin is 'Changes in behavior, such as irritability' due to low sugar. Side Effects

And just think with all the diabetics out there using the stuff. Yikes - you will be getting road rage on your bike.

You had a great ride - just think how the snow is going to slow you down when it get there...as it will eventually.

You will get snow soon enough and I hope you keep it and don't send any to me! Hope the effects of the meds eases off. Feeling cranky is never a good thing.

Well I'm GLAD not to wake up to all that snow!! Been there, done that. It is pretty....until you have to deal with it, lol!

Hang in there hun. I'm sure you will feel better soon!

We keep getting snow squalls and a dusting of snow with each one. I have pics from the snow we got last week but they're still on my camera...which is where they will stay until I have some free time. It's been a rough week here, but I'll get to it one of these days.


*thinks about that metformin and what it does to people* (hey, karla...what do you keep telling me? LOL)