todays ride, back, meds and a squirrel pic

One tenth of a mile off yesterday's pace. Do I feel bad about this? Nope. Why? Because Im getting on the bike every. single. day...not feeling well....hurt... female problems...whatever. Im still getting on the bike. The only time I wont be is a week in December when it looks like we'll be visiting folks down south for the holidays at which point I fully expect I'll be off pace for a while afterwards.
The back's feeling alot better. Im still a bit out of sorts but Im really sure it's the Metformin. Thanks for the link iggy. Looks like this is something people are just going to have to be aware of and something I'll have to keep an eye on. It really sucks. 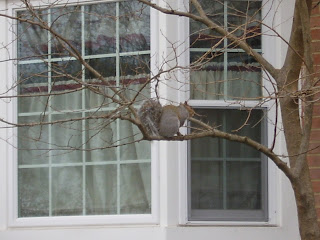 While leaving to run errands last Monday, we heard a scurrying sound in the leaves of a neighbor's yard. Who did we find, but a cute little grey squirrel scampering about in a rather mad rush. I suspect it's the one we see from time to time in the tree in the one yard across the sidewalk from our house. When we got home, I saw him in the same yard as he had been in earlier....still rooting around for his groceries I suppose. I told hubby to go upstairs and grab the camera....get a few shots if he could. When he came in, he had 3 very nice shots and told me the sweet little bugger wasnt the only one out there. Seems that squirrelly had a friend but hubby simply couldnt get them in the same shot. The one above is my fav of the 3.
We got our pictures taken today. I think I'll post them with tomorrow's entry though as I wanna dig up my senior year picture to post with them.....
I think that's about it. Im seeing my email alert popping up now and then with a message I got an email from Alice. Looks like she's trying really hard to catch up so we wont make this one all that long. Could you IMAGINE if my entries were the usual marathon ones.....those that are behind would NEVER catch up! ~gigglez~
posted at 11/22/2008 08:45:00 PM

I love thatyou bike that much!

Since I was up, dressed, out and about this morning, I decided to feed the birds. While I was out there, I saw two Charlies. A grey one and a red one. Soon after, the grey one was on my balcony, eyeing the feeder. He had brought a small apple up onto my balcony and was tearing bits of the skin off, leaving a mess.

I shoo'd him away, because I wanted the chickadees to have the seed more than I wanted Charlie to have it.

Unfortunately, neither squirrel were in good places to get pictures. I did get one of some geese wandering around off my balcony. I'll have to remember to post that one.

As long as you're riding, and being relatively consistent, that's a good thing. It's when you stop for several days, or start letting up on your distance or tension that will be the problem.

Awww...thats a great Charlie picture Ranger took - odd though how the window framing in the background look like cross hairs...

*Hugs* I'm glad your back is okay - back injuries are the total pits!!

I love your sweet posts!!! I like the juicy, fat squirrel too!

It's so great that you get on that bike every day!! I believe even if you just sit on it and have a cocktail that it counts.

Great squirrel picture. We have a black one that hangs around here, I'm going to try to get a picture of him.

Thanks for tuning into my reality show, even if you don't tell me. :)
Every once in a while I'll try to pull my ear like Carol Burnett for you.

Bad backs suck... as you doodles would say, I hope it eases with each passing day....

I have a squirrel that has started visiting me bird table, I put a feast of wonderful things out there, seeing as I had a real bad start to me bird table days lol.... Ive taken a few photos through the window but when I open the back door he buggers off.... I will try and get a good one of him in the week :).... we use to, years ago have a very friendly squirrel that would come up to us and take food out of our hands....

Thanks for thinking of me trying to catch up, Styxie. LOL